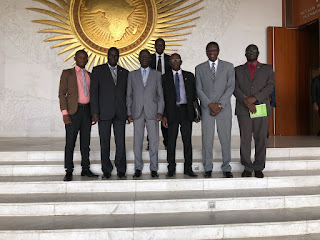 Ambassador Sulayman Alieu Jack was accompanied by the Gambian community in Ethiopia to the seat of the continental body.

During a closed door meeting with the AU chief, Ambassador Jack promised that he will do his best to raise the AU flag higher high particularly in the areas of peace and security, AU Agenda 2063, (The Africa We Want). He extended President Adama Barrow and his government's highest regards to the AU chairperson and renewed Gambia's commitment towards realising the objectives of the continental body.

After presenting his credentials, Ambassador Jack held a meeting with the Gambian community in Ethiopia during which he assured them that his doors are upon for dialogue in areas of national development. He implored on the and tasked the Gambian community to be good ambassadors as they are representing the Gambia in their various field of expertise.

Ambassador Jack used the opportunity to thank President Barrow for the trust bestowed on him to head the embassy in Addis.

Almamy Kassama, the deputy ambassador, thanked the AU Chairperson for accepting the credentials of the incoming ambassador. He assured that he will work hand in hand with the new ambassador.