BREAKING NEWS: IS THE APPOINTMENT OF THE GAMBIA’S NEW GOVERNMENT VP CONSTITUTIONAL? 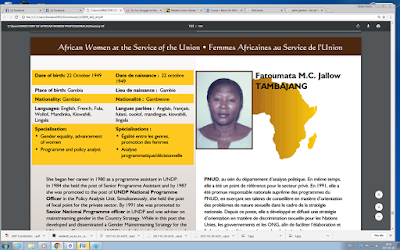 This is now the talk of the town as many Gambian both those home and abroad are registering their total dissatisfaction as per the new Gambia government appointment of it vice president Fatoumata Tambajang, youth deem it necessary for their voice to be heard as a result of sowing it to the whole world on the social media especially on Facebook.

In another development Lessyjr Ljr wrote “If the constitution of the Gambia stated that the newly select vice president (Fatoumatta Tambajang) is unqualified to the post due to her age. I therefore plead to president elect Adama Barrow to get her out of the office otherwise there will come a time at the right time we will get you and her out of office no doubt. We voted you in to do justly with the law and not to double-cross it by any means. If you want to sideline the laws of the Gambia for favoritism we will get you out and your vice president democratically someday. Gambians expect you to rule by setting up what the constitution demands. Gambians have learnt and become very aware so beware we can take you out when you fail one statement of the laws. There are so many Gambians who are fit, competent and qualify for the VP post. Mr. President you need to rearrange and put in order the VP post constitutionally...

He further more highlighted that the law was implemented and should be respected. Laws shouldn't be alter anyhow freely. Though I'm not against the fact that some laws could be impose derived from the consent of the governed (The people) but once it is implemented it should be respected. Not anyone who comes in power should be altering our laws like clothes he/she puts on” (LessyJr Ljr)

Pata Pj in his part “WE STILL CAN'T SPELL 'EHEM!'They had 24 hours to put a most urgent and important Constitutional confusion in a body bag at the press conference I'd just gotten to watch. Spokesperson Hon. Halifa did not answer nor tell us what President Barrow said. He didn't help the confusion. Advisor Hon. Mai Fatty would've given an answer and be categorical. Good or bad, we'd have gotten us one. So I hope President Barrow can pass Jammeh's test and finally spell EHEM!. Or is it AHEM!? (Pata PJ)

Manga a renounced youth activist on his part “Appointments to nonpolitical positions must be diverse. Religion, ethnicity, physical disability, etc must not be a factor. Merit based. Even if its Former President Jammeh's brother should be appointed if he gets the merits”. (Prince Almameh James Manga)

In another development form the leading online news outlet “Omar Ann is a popular political commentator. He is Tambajang’s son. At a guess, we would say he’s in his 50s. To those of you who are still insisting that our new VP, Fatoumatta Tambajang is 63, here is another proof for you. Now, do the Maths We are not lawyers, but we strongly believe that no issue in this country is beyond the capacity of our constitution and democratic system to address. Can you please show us Tambajang's birth certificate or school transcripts? Said by (What's On – Gambia)

The media also highlighted that “Gambian bi dafa buga palasss! One of the main reasons why Jammeh was able to stay for 22 years. Ma'neh, let no one fool you. Tambajang is more than 65 - constitutionally unqualified to be our Vice President. What nonsense vetting committee are they talking about? Show us her BIRTH CERTIFICATE. Not I.D card, please! Read here more about Tambajang's controversial appointment and her link with the former government”. (What's On – Gambia)

Ababakr a renowned human right activist and a lawyer by profession mentioned in various development that “Constitution of the Gambia is not perfect but it is one of the best in the world. Jammeh abused it because he is intimidated by it.I stated emphatically that the 1997 Constitution is not Jammeh’s Constitution, The age limit in the Constitution is not one of the amendments made by the Jammeh regime. Our coalition leaders know better. If you below 18yrs you won't vote. If you 71 you can't be a judge. If you above 65 you can't be vice-president or president. (Ababakr Sidiq Azain)

According to Melville Robertson Roberts on her part she wrote on her Facebook page “I have seen the actual birth certificate of the vice president. it’s an old old document dated and registered way back in 1977 when I am 100% sure that she never ever conceived the idea of getting into politics nor becoming the vice president of the Gambia. And may I add that I am very satisfied with this as the age limit was only included in our laws in 1997 when the constitution was born. Her year of birth is 1953!!!!!!!!!!!!!!!!
“I had said in my post of 2 days ago that a woman of her caliber armed with integrity, grace, wisdom, knowledge, humility and with vast experience in public life would find no reason to lie just for a position as vice president. I am yet to meet any human being so humble and god fearing. Let’s move on to the next item Gambia. This one is done deal”.
“P.s.. My friends and people who know me well can attest to the fact that I will not lie for any man. I have no reason to. I say things as they are regardless of who is concerned or affected”. ( Melville Robertson Roberts)

Hydara in his part mentioned that “it has always been my argument that THE CONSTITUTION OF THE GAMBIA IS TOO GOOD FOR THE PEOPLE OF THE GAMBIA. If our leaders who are supposed to DEFEND the Constitution decide Not to RESPECT it, then, they lack both legal and moral authority to tell anyone to respect it. That is highly DANGEROUS as it opens up the floodgate for others not to respect it. Consequently, it leads to LAWLESSNESS. We are not asking for TOO MUCH. We want TRANSPARENCY. Please, RESPECT THE DOCUMENT!!” (Sheriff Deeno Hydara)

Why not the coalition government come forward to clear our doubt as soon as possible, to minimise defects.
BY: SAIDINA ALIEU JARJOU