Gambia's Ambassador To Ethiopia and African Union Presents Credentials To The President of Ethiopia. 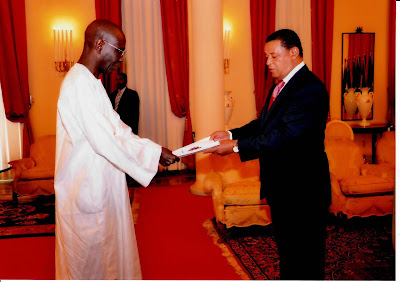 The Gambia's ambassador to Ethiopia and the African Union (AU), Mr. Sulayman Alieu Jack Tuesday, December 19th, presented his letter of credence to H.E. Mulatu Teshome, President of the Federal Democratic Republic of Ethiopia  as the Ambassador Extraordinary  and Plenipotentiary of the Republic of The Gambia to Addis Ababa, Ethiopia.

The presentation ceremony was held at the Presidential Palace in Addis Ababa and it was attended by high ranking officials from the Ethiopian government and Gambia Embassy officials.

During the close door meeting H.E Ambassador Jack conveyed the fraternal and warm greetings of H.E. President Adama Barrow to his Ethiopian counterpart.  He indicated his appreciation of the enduring friendship and strong spirit of solidarity that continues to underpin The Gambia and Ethiopian relationship and expressed his commitment to its further strengthening through mutual beneficial cooperation of the two countries. He also expressed his appreciation of the impressive economic growth that Ethiopia has registered over the years and her continuing and steadfast support to the efforts to develop the African continent.

H.E. President Teshome reciprocated the fraternal and warm greetings of his Gambian counterpart. He congratulated The Gambia government and people for the peaceful, historic and democratic transition that occurred in the smiling coast and recalled the fond memories he always cherished about his previous visit to The Gambia on two occasion. He further more highlighted that Ethiopia will continue to support the effort to develop the African continent and to work on mutually beneficial and development partnership with African countries including The Gambia.

In another note Ambassador Jack credence have been approved by The Chairperson of the African Union Commission, H.E. Moussa Fakki Mahamat and the President of Ethiopia. He will also soon present his letter of credence to the Executive Secretary of United Nations Economic Commission for Africa (UNECA) and he also doubled as the Gambia Ambassador to Kenya.

The discussion were followed by book signing and a photo session.