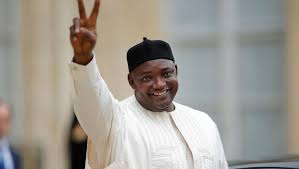 It is over one year since inauguration the Barrow led administration is yet to demonstrate any leadership or clear direction as per campaign promises.  This is believed to be an oversight by the President and his advisers, due to a lack of familiarity and understanding of the existing 1997 constitution.

The last time I checked the government under the leadership of Adama Barrow have lost touch with the people of The Gambia and have lost ability to maintain order, command and respect for the rule of law.  This is leading people to take the law into their own hands.

The question one might be quick to ask shall be, is that The Gambia Edwards Francis Small fought for? If Small were to arise from the grave yard on see the killings, robbery, theft and rape happening in The Gambia that he dreamt would one day be the heaven of peace. I am quite sure that he will regret the sacrifices he made to see The Gambia where one day her citizens will live without fear of being robbed rape and murdered.

Electricity is very vital in our daily lives, the patients who are getting their treatment in various hospitals also face many difficulties as per NAWEC’s inability to supply uninterrupted electricity and water supply to the citizenry. The patients operations are not happening on time as the electricity is moving on and off like a timing bomb. This increases their diseases as the fans of the hospital are not moving which result to the patients to feel great pain in their body.

Furthermore, The Gambia tourism industry has successfully improved and developed but it is still facing some challenges beyond imagination which have greatly affected the safaris tours within the country. These challenges include; limited marketing due to insufficient funding as a serious problem facing the tourism industry and it has retarded many people internationally to know Gambia as a tourist destination hence affecting safari to the smiling coast. The high competition from neighbouring countries like Senegal, Mali and Guinea Bissau has affected Gambia’s tourism sector since it’s considered a land locked country and most tourists go to the neighbouring for leisure

Corruption in The Gambia is an obstacle that restricts citizens on a daily basis in their enjoyment of human rights and fundamental freedoms, contributing to the perpetuation of poverty and hindering economic opportunity. The collective recognition of the challenges posed by rampant corruption has led to political turmoil.

There is an urgent need for institutional reforms that will focus on improving financial management and strengthening the role of auditing agencies as such will make The Gambia a free zone of corruption. Also strengthening citizen’s demand for anti-corruption and empowering them to hold the government accountable as sustainable approach that will helps to build mutual trust between citizens and government.