The last time I checked Foni bigot the unusual as a bitter confrontation between the peaceful protesters and Senegalese soldiers at the entrance of the village letting to bloodshed. Residents of the rural settlement and the Foni environs demanded for the immediate evacuation of both the Gambian and Senegalese soldiers in Kanilai. The protesters were shot on their route to Kanfenda leading to some citizens sustaining injuries and fatal, Mr. Haruna Jatta who was later laid to rest on the 6th June, 2017.

It was narrated that the ECOMIG soldiers from Senegal were informed to shoot the protesters as they are rebels from Cassamance? If that was true then it is complete ridiculousness to allow any nation, regardless of the external generosity to fight their enemy within your land, and knowing very well and with supreme belief that the aftermath can be life threatening.

Of recent 3 people have been confirmed dead and several others injured in a clash between residents of Faraba Banta who were expressing their constitutional rights as guaranteed by Section 25 (1) A, 25(1) B and 25(1) D respectively of the 1997 Constitution and the members of The Gambia Police Force Intervention Unit (PIU). 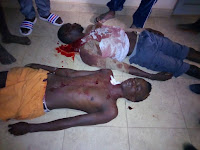 Sources highlighted that the incident happened after Police opened fire on a crowd of unarmed protesters who were concerned about sand mining activities by Julakay Engineering and Construction Company in their community. It was described that the mining company was granted licenses to operate closer to their rice fields which they perceived to be counterproductive not only to crop production but also exposed them to environmental dangers.

One of the greatest problems that the world is facing today is that of environmental pollution and degradation, which is causing grave and irreparable damage to the natural world and human society with about 40% of deaths worldwide being caused by water, air and soil pollution. The decrease in quality of air leads to several respiratory problems which includes asthma, lung cancer chest pain, congestion, throat inflammation, cardiovascular disease and respiratory disease.

Furthermore, In a Democratic State the police are to protect, serve and to deliver criminals into the hands of the law who threaten the livelihood, property and peace of other sovereign citizens as in Section 178 (2).

It is one year now investigation into Haruna's death was never make publicly as promised. But the commission was set to investigate Faraba killings and ultimate one month duration was given to the said commission to tender its report and several arrests were made, IGP decided to resign in respect of that and the president also visited Faraba on the 22nd June, 2018.

Democracy means a government by the people and for the people governed by the parameters of the constitution. What happened in both Kanilai and Faraba is sad and unfortunate, there is no justification for the killing and shooting of the citizens. If service men and power holders can abuse power what is expected of the citizens then? This can call for a further retaliation from others. The Barrow led administration must endeavour to investigate and provide the killers and face justice as per the laws of the land.