I Slept With My Gate Man Just To Have A Child for My Husband. 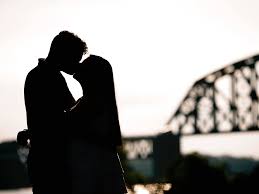 Once upon a time when I was a student at Nusrat Senior Secondary School, I normally passed a man sitting at the junction just adjacent to the Bundung mosque on my route home. One day he approached me and asked for my number. Which I did eventually we started communicating both day and night as friends and ended up as lover. After dating for 3 years he requested for marriage. During the days of our relationship he informed me that his mum is giving him though time to get married so she can see her grandchildren before she died.

As we got married newly his mum showed me love, care and pampered me as a newly born baby with the intention I will give her son Lamin a child. After years of marriage I was unable to get pregnant as a result my Mother in-law disliked and hated me.

I was married to Lamin for 10 years. We had no child. “The worst was that I never got pregnant even for a day.” His mother Mba Fatou became so irritated that she started breathing down my neck as she gave me no breathing space at all. She moved from Farafenni to live with us at Brikama and practically made my life unbearable in my matrimonial home.

It got to a point that she stopped eating the food I cooked or even take water that I offer her, according to her, I should be feeding my children so that they would grow healthy and stronger and not her as she is 62 years old. She shouted “Mariama Sibo, if you had children, you are supposed to be feeding them with all these food so that they would grow healthy and strong. I am getting old so I don’t need all these garbage and poison you call food. Take them away and give me grandchildren, I want to see them before I die,” she would scream as if she is using a loudspeaker. She also stopped talking to me as I became her greatest enemy, however, the only time she talks to me is when she wants to abuse me and remind me of how barren I was.

So one day I visited my senior school friend Binta who live at Bakau. I narrated to her about the challenges I faced in my marriage as my husband is unable to impregnate me. And I knew that the fault was not from me, she advised me since my husband is impotent let me suggest to him to appoint a gatekeeper who will be doing the work and eventually I will conceive from it. So luckily when I proposed to him he accepted my idea and thanked me for the brilliant idea, not knowing my plan nether my intention.

I am just a woman who loves my husband very much and didn’t want to lose him. I just did what I had to do to save my marriage even though I feel guilty sometimes. It was not easy but I slept with my gateman so that I could give my husband a child and to stop his mum Mba Fatou from insulting me. 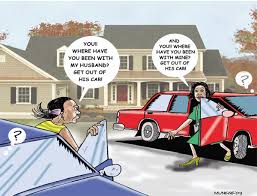 Lamin and I love each other so much that he stood by me despite all his mother did or said to irritate me to leave him. We visited different specialists from EFSTH to Lamtoro and they all certified us medically fit. I have also visited marabous’ from Kartong to Koina all in the name of getting pregnant so that my mother-in-law can stop humiliating me yet I couldn’t get pregnant.

At a point, I stopped coming out of my house because it was obvious my mother-in-law had vowed to frustrate me out of her son’s home. Most times, I just stayed in my bedroom and either cries, pray, think and then sleep off because I was scared of his mother confronting me. To make things worse, she sent away the mate according to her, I don’t need any mate because there are no children to take care of. So let me take care of my house for myself and stop wasting his son’s hard earned money.

It was just the three of us living at home with the gateman Bakary, “Allah, I was always so terrified even when I hear her voice from a distance.” It is so heartbreaking to say this but my husband usually pleads with me to come out of the room and this makes him feel so unhappy especially those times I refuse because I don’t want to come face-to-face with his mother. When her troubles became too unbearable, Lamin practically drove her out to Farafenni just to make me feel safe and comfortable in my own home. Even after she had left for Farafenni, I could still hear those abuses in my head so I decided to take the bold step as advised by my friend Binta.

Bakary is 24 years old and graduated from the University of The Gambia with a BSc. Degree in Management but because he could not secure a job, he opted to become a gateman. When I called his name with a marvelous tone Baxo, he replied yes madam. I asked him to come inside my bedroom. And placed my hand on his laps and promised to give him D15, 000 if he sleeps with me just once but I never disclosed the reason for this. However, Bakary thought I just wanted to cheat on my husband Lamin with him. I planned it during my ovulation so that I could get pregnant, although it was not easy sleeping with another man especially your gateman. I knew I was betraying my husband but I saw it as a necessary action. After a month, I discovered that I was pregnant. So, as promised I gave him the agreed D15, 000. When I told my husband that I was pregnant, he was so happy.

When I was six months pregnant, he informed his mother and she immediately returned from Farafenni to the house. She pampered me like a baby and also took good care of me. I never wanted to do any scan but my mother-in-law insisted. When I finally did the scan, it showed I was pregnant with a boy. My mother- in-law and husband were very happy while I felt much fulfilled. “Allah thank you for rewarding me with a boy after ten years of barrenness,” said my husband I muttered like a coin. 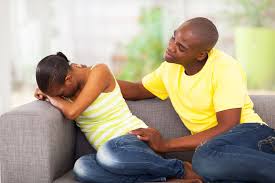 When the child was born, he took ill for some time. It took a while before he felt healthier after several treatments and this got me anxious. Lamin insisted that blood test be carried out on him to determine his blood group and genotype and then came the shocking revelation. The doctor informed us that although his blood groups O, however, his genotypes is AS meanwhile Lamin and I are both AA. I wanted the ground to open and swallow me up because I felt Lamin would ask questions but to my surprise, he did not. He just said, “Darling, let’s go home. We have had quite a long day, you and my baby need to rest as the sun is too hot.”

One year later, he held me closely and said, “Mariama, don’t be afraid. I don’t want to know who the father of the child is. I know whatever you did, you did to save our marriage and I am very honored of you. I promise to always love you and my child. I promise this will be undisclosed between us. I love you darling. I know we will have our own children someday.” I wept as he rubbed my tears with his hands.

I know what I did was wrong but at least my mother-in-law is extremely happy with me, that is all that matters. Although, everyone is happy but I feel guilty that I selfishly used an innocent man to achieve my aim. But before anybody judge me, just put yourself in my shoes and think for a moment what you will do?