THE UNTOLD STORY ABOUT THE GHETTO (PART.1)

Ghetto: The etymology of Italian ghetto was formerly the subject of much speculation, but today there is little doubt that the word comes from the Italian dialect form ghèto, meaning “foundry.” A foundry for cannons was once located on an island that forms part of Venice, where in 1516 the Venetians restricted Jewish residence. The word ghèto became the name for the area and was borrowed into standard Italian as ghetto, with the meaning of “section of a city where Jews are forced to live.” From there it passed into most other European languages. Since the late 19th century.Whenever people hear the word ghetto immediately they associate it with sadness, negative stereotypes and death. A dark shadow is cast on anything identified as being ghetto and anyone from that environment is also deemed to have the same characteristics.

I’m not here to defend everything that happens in the ghetto. Yes, much of it can be unnecessary, destructive nonsense. Indeed there are many negative situations that are oversaturated in the ghetto. However, just as there are harsh consequences to having grown up in this environment there are also some benefits as well. There are many life coping character traits that are implanted in you from growing up in the hood. Many of these character traits are what make you stand strong among the weak and feeble. This is needed in today’s world where people are experiencing life situations that they thought they would never have to face. Which is why I stand by the belief that the ghetto does have its problems but you can find glimmers of happiness there well. 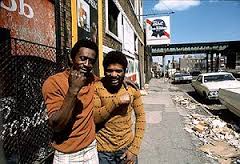 Growing up in a not so pleasant environment gives you the ability to handle stressful life situations without losing your mind. In the past you may have had situations where you and your family were with little food, bills were due with no way to pay them. These situations mold you into having the strength necessary to cope with future situations which may be less life threatening yet equally stressful. This give you the ability to handle anxiety and pressure without cracking under it and keeping a clear mind on your quest to find the best solution to that problem. This is what is needed when you are facing these situations. You need a clear mind that will not become foggy and cause you to lose touch with reality. Nope, you won’t catch me shooting up my job and co-workers if I lose it. Sure I would be upset, but I would simply pick myself up dust myself off and keep it moving with a new plan. 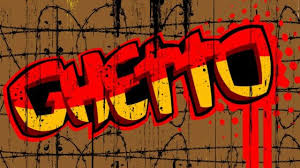 Time in the ghetto gives you the ability to blend in no matter where you are. Of course an important note to this is that the person must have spent some time outside of the ghetto in order to be able to master this chameleon affect. For instance, I grew up in the hood but graduated from the University of The Gambia. However, both of these experiences aided in molding me into being a multifaceted person. I can go to the most urban areas in any inner city to the suburbs to Street and feel the exact amount of comfort level in all places. Without ever once doubting who I am or feeling as if I am being phony or masquerading in any way. The truth is that the world is big and there is much more to it than your stoop, or your block. You have to be a master of yourself first and then you can master any environment you encounter.

At the Ghetto, members help and stand for one another interim of difficulties and formulate strategies, ideas on how to live with an amicable life.

Although I no longer live in the hood, I can still empathize with what is happening there and can connect on a deeper level with the people there and their lifestyles and experiences. It also is what gives me the skills I have today!!
“At the Ghetto low dreams are crime”
By: Saidina Alieu Jarjou