Thumbs Up To The Barrow Led Administration For Ratifying the AfCFTA.

Readers could recall that in January 2012 the 18th Ordinary Session of the Assembly of Heads of State and Government of the African Union, held in Addis Ababa, Ethiopia, adopted a decision to establish a Continental Free Trade Area by an indicative date of 2017 as per AU Agenda 2063.

On 21 March 2018 Africa’s leaders make immense history in Rwanda when they signed an agreement that will launch the African Continental Free Trade Area (AfCFTA). At an extraordinary meeting of the Heads of State of the African Union convened by President Paul Kagame who used to be the Chairperson of the AU at that time.

Of recent news reaching us has it that The Gambia under the visionary leadership of President Adama Barrow through the National Assembly ratified the African Continental Free Trade Area agreement, meaning the bill now has the minimum number of ratifications needed to come into effect.

Albert Muchanga the African Union Commissioner for Trade and Industry upon hearing the news twitted; “Good news! The Parliament of The Gambia has APPROVED ratification of #AfCFTA Agreement making us meet the minimum threshold. “The AfCFTA market is being born and is one step ready for launch of its operational phase in July this year. 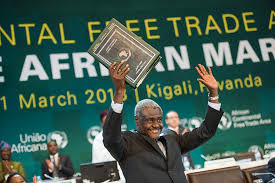 The African Continental Free Trade Area will also strengthen Africa’s position in global trade: “AfCFTA will make Africa one of the largest economies in the world and enhance its capacity to interact on equal terms with other international economic blocs.”. Said. H.E. Moussa Faki, the Chairperson of the African Union Commission.

It is believed that the AfCFTA will bring together all 55 member states of the African Union covering a market of more than 1.2 billion people, including a growing middle class, and a combined gross domestic product (GDP) of more than US$3.4 trillion. Besides, in terms of numbers of participating countries, the AfCFTA will be the world’s largest free trade area since the formation of the World Trade Organization.

Furthermore, the monumental objectives of the said AfCFTA are to create a single continental market for goods and services, with free movement of business persons and investments, and thus pave the way for accelerating the establishment of the Customs Union for a better Africa we want.